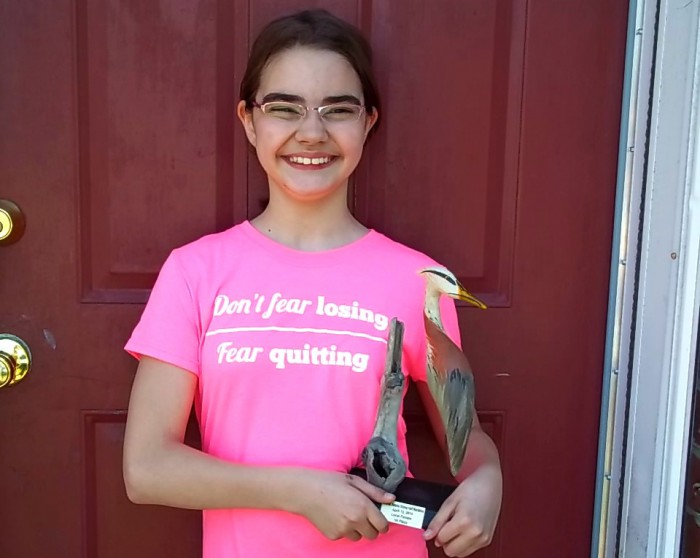 The simple phrase on Rebecca’s shirt is profound. She has triumphed in competition and by overcoming incredible hardships – and refuses to quit.

Rebecca Rollick was born with Arthrogryposis, a congenital disorder that caused severely clubbed feet, a twisted right shin bone, hip dysplasia, contracted ring fingers and a heart murmur. After six surgeries to release tendons in her ankles, transfer tendons and correct her shin bone placement, she was finally able to walk at the age of two. But none of this was going to slow her down.

Rebecca became involved with Team Hoyt Virginia Beach at 6 years old – a team inspired by father, Dick Hoyt, and son, Rick Hoyt, who compete in marathons and triathlons together across the country. Participants push children and adults with special needs in foot races, and the effect on Rebecca was clear. She loved it. Three years later, 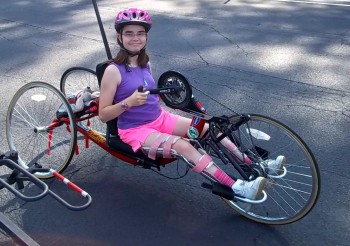 she saw a Wounded Warrior Marine veteran on a handcycle, and she decided that she no longer wanted to be pushed but wanted to race under her own power. Later that year, an organization called Preston’s March donated a racing handcycle to Rebecca. The very Marine veteran who inspired this dream, Darrin Snyder, became her coach.

Two weeks after receiving her handcycle, Rebecca entered her first race. Since that first 5K race, she has competed in 26 races – 5 of them being half marathons. Her goal is to be classified and race in the Paralympics, and continue to spread the word about inclusion for children and adults with disabilities.

Rebecca’s fighting spirit and love of life are infectious for those who meet her. She loves animals, and at every race she makes a beeline for people with dogs to ask to pet them. On her facebook page, there are as many pictures of her with dogs as there are of her racing! She enjoys creating things, and uses recycled materials to make homes for her stuffed animals. She loves math and has been enjoying P.E. Class even more now that handcycling has strengthened her arms.

When her family contacted us about donating a handcycle trainer, we knew we wanted to be part of her journey. We want to see her continue to thrive and be a great advocate for the sport, and we're not alone! Fat Frogs of Chesapeake, one of our awesome dealers, provides bike maintenance and repairs on Rebecca's handcycle. Many others have donated on her fundraiser page.

Thank you, Rebecca, for sharing your story with us!

Do you know someone like Rebecca who is making an impact in their sport? Let us know!

My brother and I are proud that we know Rebecca and she likes her shirt from www.runtelligence.com!

You captured this great story very well. I was with Darrin when he met Rebecca. Our families became fast friends, as I am his Fiancé. It's been amazing to see her progress, she has a strong will and such an infectious personality. Her Mom Jessie is such a great advocate for her and has helped her to continue reaching her goals. Darrin and I were lucky to meet them that day, it has changed the course of our lives. Darrin just finished at ODU for a degree in Therapeutic Recreation and I start there in the fall to follow suit. Meeting Rebecca was an inspiration that led us down this path. 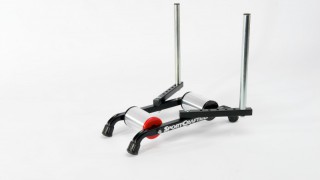 Easy to use handcycle trainer that provides ample resistance for high-intensity interval workouts. 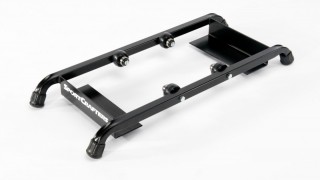 For use with any SportCrafters Trike or Handcycle Trainer. Allows the trainer to move fore and aft slightly to offset any “rocking” motion caused by pedal stroke.

Chris from Draft Wheelchairs demonstrates how easy it is to use a SportCrafters Handcycle Trainer. 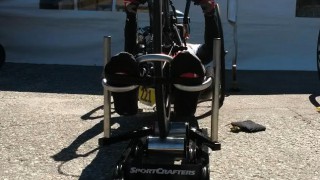 By Mike Durner | Coach, Military and Veteran Cycling - U.S. Olympic Committee Why is training on rollers beneficial for handcycle athletes?  Coach Durner provides some insight, as well as an example workout that can improve technique.